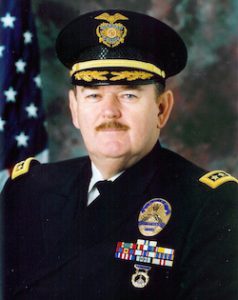 Bernard Wilson served as Chief of the Los Angeles Airport Police from 1999 to 2005. After retiring from the Department, he became a consultant specializing in crisis management, helping companies, nonprofits and governments make tough decisions and get the word out to stakeholders. He has worked on several airport security projects and is an advisory board member for a company developing wireless communications technology for aircraft. He was recently appointed as a board member for the Certified Aviation Security Professional (CASP) credentialing process through the American Board for Certification in Homeland Security, and was one of the first people to be awarded the CASP designation. Chief Wilson generously agreed to share his expertise with LAAPOA members on some of the key issues that faced LAXPD in the past and continue into the present.

What challenges was LAXPD dealing with during your tenure?

When I took over as Chief, we were recovering from some internal organizational difficulties, both at Airport Police and with LAWA, known then as Department of Airports (DOA). Airport Police literally doubled in strength between the time I joined in 1979 and 1984, for the Olympics. Then it just about doubled again between 1984 and 1999, and doubled again during my tenure as Chief. However, our organizational infrastructure didn’t catch up. We were always short of first- and second-level supervisors and civilian administrative staff. There was also a general lack of definition for what DOA wanted Airport Police to be, ranging from strictly a security function to full policing, or something in between. Those opinions not only varied over time, but they also varied within the Department and between DOA and City Hall. Then there was a constantly expressed belief that we were too big and our strength should be reduced. Case in point: In 1986, we had already outgrown our station on 96th Street even before the design was completed, but there was a DOA belief that we would be reducing our strength, so no problem. That’s why DOA passed up the opportunity to stress the south addition for a second story.

From 1984 to 1999 we were subjected to at least five outside studies and organizational changes, with lots of “advice” given. When I was promoted to Chief, I was told to take the foundation and make it the No. 1 airport law enforcement agency in the U.S. Great idea — but funding and organizational commitment wasn’t there, because political opinions kept interfering with that vision. So the biggest issues and challenges were funding, personnel numbers, facilities and, most of all, no clearly stated belief in us as the law enforcement and aviation security experts for our own department. We were always relegated to the position of “option.” In my 26 years at LAX, there were at least five serious scenarios considered for LAPD to take us over.

Improving LAXPD equipment and infrastructure is an urgent problem now. That was something you struggled with as well?

Equipment, vehicles, facilities: They have been problematic at LAX for security and police personnel probably since 1946. It was always mind-boggling to me to go visit Whittier P.D. or Torrance P.D. and see their facilities and equipment, then compare it to ours, especially in a place where we didn’t rely on tax dollars and where everything else is so first-rate. Having been on the inside for budget discussions, I can say that it always seemed to come down to sticker shock. We weren’t a small department. We had over 900 people when I left in 2005, making us a good-sized law enforcement agency. What some administrators simply couldn’t grasp is that a good-sized agency costs money — a lot of money. If you don’t want to spend the money, then don’t have the agency. It’s really that simple. No parent would ever say, “Shoes cost too much. Let’s not buy them for our kids, because it’s better to keep the money in the bank.” Or “Food? Can’t all six kids share a sandwich?”

What are your thoughts about officer hiring and retention?

When I took the written exam in 1978, there were 2,500 applicants. They hadn’t hired anyone since 1977 and were expecting to hire, maybe, 12 in 1979. That pattern kept repeating — hire a few, lose a lot, hire a few — until 1980, when we started hiring entire classes at a time in our buildup to the Olympics. Many of those hires have retired. Those classes from 1980 on had a lot of young people in them. (Before 1980, we used to hire from open and promotional lists, with many people being in their 30s or older, already with five to 10 years of City service.)

I notice from Facebook posts that Academy graduations seem to only include two to three Airport Police people. I’d be worried if those 1980-1986 classes started retiring all at once. Filling the gaps is a lengthy process. Between the application, background, selection and Academy processes, you’re looking at well over two years — and that only delivers somebody ready to start FTO. Experience is a valuable commodity and hard to come by.

Why is it so important for LAXPD officers to receive pay and benefits equal to other agencies?

Parity has been an issue since before I started at LAX, going back to at least the early 1970s. What happened is that DOA started hiring people to stand at screening stations (Boarding Services Bureau) and created new (lower) pay levels for those officers and supervisors, so starting pay dropped. Meanwhile, in the late ’60s, LAPD had made some serious changes in its ranks and pay scales through what was called “the Jacobs Study.” That was followed by several years of substantial contract adjustments for LAPD. In some cases, LAPD got only an extra 1% or 2% raise — but add those up and compound them, and real gaps started showing. I remember several old-timers telling me that the difference between DOA Security Bureau pay and LAPD pay in the late 1960s was less than 5%. Since then, Airport Police has been playing catch-up, or at least trying to.

Without equal pay and benefits, in my opinion, the result is unjustified and unsupported inequality. For years, the CAO tried justifying it by saying, “You don’t do the same work.” If nothing else, that stopped forever on September 11, 2001. I flat out walked into the CAO’s office a week after 9/11 and said that I never wanted to hear those words from them again. “The Port Authority of New York and New Jersey P.D. lost 37 officers on September 11, and our people are working 16 to 18 hours a day to make sure that LAX isn’t the next target, knowing that they might face the same sacrifice,” I told them. “Going armed to fight evil is the same work, no matter who does it, or where.” They never said “not the same work” to me again, but they did support the failed Prop A merger attempt.

The disparity is quite problematic. We went to a lot of trouble to improve selection and training standards. We reached a point where we became the first choice of agencies for many applicants, as opposed to a “good enough until somebody else hires me” department, which was often true in the ’70s and ’80’s. (It never was for me, as I was thrilled to mix aviation with policing. Many others felt the same way for different reasons.) But, although young officers don’t tend to look at it, the pension is a serious shortcoming, as is the disability retirement. Thirty years and at least age 55 are the requirements for a full retirement under LACERS. Leave before that and the benefits are substantially reduced. I should know — I left with 30 years at age 52 and took a 15% penalty for not being 55. Then the 2.16% calculation doesn’t do any favors. The pension is not adequate for public safety employees.

It actually could put people in harm’s way. California cops have presumptive IOD for heart, blood pressure and back problems. There are good reasons for that, not the least of which is that time takes its toll on cops and those injuries shorten lives. Sure, there are dedicated diehards who work patrol until the very end, and God bless them for that (I’m thinking about Lennie Watts and Jesse Pharr), but where else in L.A. County — or in California — are you likely to see patrol officers in their mid-to-late 50s, even 60s, because they have to keep working, even with 20 to 25 years as law enforcement officers? What does this do to recruitment efforts? The best question of all: Why is it this way?

And, picture two officers, one LAPD, one LAXPD, both getting identical injuries at a TC at LAX. Why does the LAXPD guy only get a disability pension of 1/3, while the LAPD guy gets so much more?

For more insights from Chief Wilson, see Part 2 of this interview.