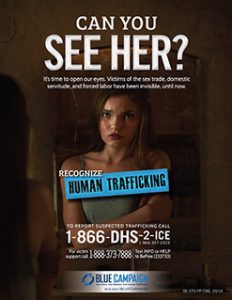 On February 9, San Francisco authorities announced that seven teenagers, some as young as 14, had been rescued from forced prostitution in the Bay Area during Super Bowl week. Similar crackdowns tend to make headlines whenever sports championships come to town, because such large events are said to draw increased sex trafficking. While law enforcement and activists frequently focus on these high-profile occasions to raise awareness, the sad reality is that human trafficking is an everyday problem in communities across the nation, and constant vigilance is required to combat it — particularly at our airports.

Human trafficking is a form of modern-day slavery that uses violence, threats, fraud, debt bondage and other tactics to exploit people for commercial sex or labor. Traffickers prey on men, women and children experiencing psychological or emotional vulnerability, economic hardship, lack of a social safety net, or displacement by natural disasters or political instability. These victims are often lured with false promises of well-paying jobs or manipulated by people they trust, then forced or coerced into prostitution, domestic servitude, or farm or factory work. Human trafficking is a hidden crime that usually goes unreported and unprosecuted, but the International Labor Organization estimates that there are 20.9 million victims, about three out of every 1,000 people in the world. It’s the second-largest international crime industry (after drug trafficking) and the fastest-growing criminal enterprise in the 21st century, generating $150 billion in profits annually. In addition to trapping individuals in horrific situations that deprive them of their human rights and freedoms, trafficking increases global health risks and fuels the spread of organized crime.

Americans might think of modern slavery as something that happens in sweatshops in far-off developing nations, but tens to hundreds of thousands of victims are trafficked into and within the United States each year; many enter the country on lawful visas or are American citizens. California is especially at risk due to its coastal location, proximity to international borders, numerous ports and airports, high immigrant population and large economy, which includes industries that attract forced labor. Nearly 950 human trafficking cases were reported in the state in 2015, and more than 3,800 victims have been discovered since 2007 — likely representing only a fraction of those forced to work here against their will. Three of the nation’s 13 highest-intensity child sex trafficking areas identified by the FBI are located in California: San Francisco, San Diego and Los Angeles.

L.A. is a center for forced labor in sweatshops, as many local textile and clothing manufacturers attempt to compete with low-wage international labor. It’s also a major transportation hub for trafficking networks, and a top entry point for bringing victims into the U.S. In May 2015, City and County officials rolled out a new “Don’t Be Silent” campaign aimed at raising public awareness, identifying suspicious activity and ultimately putting an end to human trafficking in Los Angeles. Most recently, in late January 2016, a three-day multiagency operation arrested 198 people and rescued 18 trafficking victims, including 12 minors, in L.A. County.

Airports are on the front lines of the battle against human trafficking. Because victims are often transported by airplane, law enforcement and advocacy groups are increasingly looking to the aviation community for help in recognizing and reporting this crime in progress. The Department of Homeland Security’s Blue Campaign, established in 2010 to boost public awareness of human trafficking and provide training to law enforcement and transportation workers, posts information on video monitors, posters and shopping bags at 13 airports across the country, including LAX. Many airlines train flight crews on spotting and handling trafficking situations, and some airports (most recently San Francisco International, in advance of the Super Bowl) offer workshops for ticket- and customer-service counter employees, custodians and maintenance workers. Observers are advised to watch for travelers, particularly young women, who:

“The specialized peace officers patrolling and protecting our nation’s airports play a pivotal role in identifying and stopping human trafficking as it happens,” says LAAPOA President Marshall McClain. “With Los Angeles area airports a major thoroughfare for this terrible crime that victimizes some of society’s most vulnerable members, we all need to do our part to ensure the safety of travelers and local residents. We urge our members to remain aware and on guard, and we call on LAWA to become more mindful, proactive and engaged regarding this issue.”

Further information about human trafficking is available from the nonprofit Polaris Project or the DHS’ Blue Campaign.